The other day, I stopped to talk to a neighbor whom I hadn't seen in person for a little while. She gave me a quizzical look as she tried to figure out what was different about me. New glasses? Well, yes, I did get new glasses a couple months ago. Different hair? I suppose it's a little longer than I used to wear it. She stopped guessing there, although she seemed dissatisfied, knowing she probably hadn't hit on the true cause of the difference.

Last weekend, talking to another individual, I mentioned that I'd lost 55 pounds since May 2020. She looked surprised, saying, "You must have hid it well. I couldn't tell you had that much to lose." I'm not sure if she was just being polite, or if she just wasn't very observant.

In another recent incident, I shared a one-year progress photo on social media, and had one friend say that she "guessed" she could see the difference. 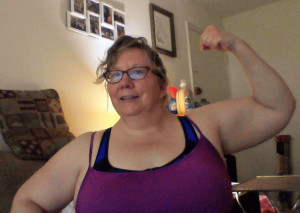 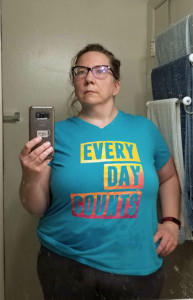 Now a caveat: I am only about halfway to my goal, which would put me in the "overweight" BMI category, rather than the "obese" category where I currently reside. According to the CDC, I'd have to lose a further 20 pounds after that goal in order to fit into the "normal" category. I figure I'll see how I feel once I reach my goal and decide whether I want to continue or whether I will stick with my original goal. Once I acheive my goal, I'll be just 10 pounds heavier than I'd been when I got pregnant with my son about 11 and a half years ago.

To be clear, I'm not doing this for cosmetic reasons. I've never been someone who cared particularly much about appearances. In fact, at my most beautiful, according to superficial standards, I was completely unaware that I possessed any modicum of attraction and was always a bit shocked when guys stumbled over their words striving to talk to me.

So it's not that I need to hear gushing praise from people over what I've achieved so far. It is, however, a little bit disheartening to have worked so hard and to hear the message, essentially, that people can't even tell the difference. It feels like I'm being gaslighted, like some force wants me to question whether I've made any progress at all.

And yet, I know I've made progress. My blood pressure has decreased considerably, and my heel pain has complely disappeared. My flexibility and mobility have increased dramatically, and so has my muscle tone. Yes, I still wear a lot of the same items of clothing, but that's primarily because most of this mommy's wardrobe consists of yoga pants and T-shirts, and those tend to have a lot of stretch in them. If I'm perfectly honest, many of those items of clothing were getting too tight back when I started this process a little less than a year ago.

In addition, I've begun "shopping in my closet," bringing out some more fitted clothes that I'd taken out of my drawers when they no longer fit properly. As the weather warms up, I'll be slipping on some jean shorts, for example, that haven't worked on me in at least several years.

Why do people fail to recognize a change? I have a few theories. One of the main theories is that I have a large bust, and that really hasn't changed. If I'm honest with myself, I'd imagine that's what a lot of people first notice about me, male and female. Much to my chagrin, I was never really able to pull off an androgynous look, though I tried for a while in high school.

Another possibility: even at my heaviest, I tended to be more fit than many other people my size. I've been active for years, attending workout classes, lifting weights, and starting in January 2020, teaching aqua fitness classes. So while I have not been at my ideal level of fitness, I've had more muscle tone than many other people who had reached the same top weight. And that has probably has made the change seem less dramatic.

All I can do is keep working, keep progressing, keep getting healthier. Because while praise from other people is nice, they're not the reason I'm doing this. 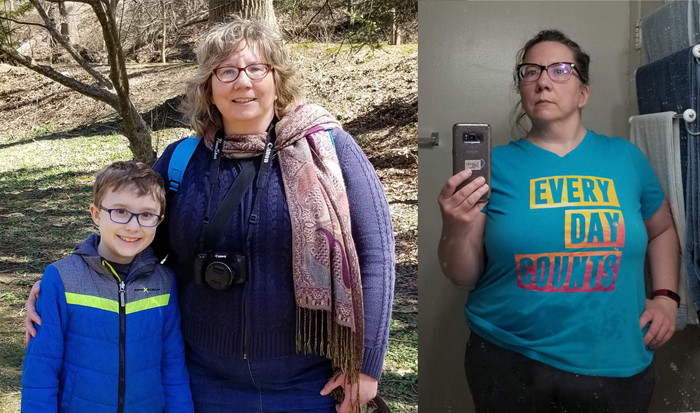